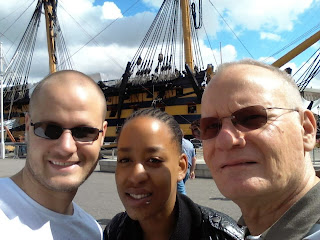 It is time to make my annual contact again. Matt, Tami and I went away to Portsmouth for a weekend and visited the Mary Rose museum recently opened, the oldest restored ship in Britain and Henry VIII’s flagship. We also visited my mom’s cousin Joan and her husband Patrick Pearson in Milford on Sea, both well into their 90s and still relatively well. The picture above was taken in Portsmouth in front of Lord Nelson’s ship Victory.

I am still living in a flat in Harborne where I have now been for three and a half years. Matt makes his home here during his breaks. He is now at the University of Bristol doing his second year of PhD studies on a fully-funded scholarship. His research is on cancer, so he has gone into the biomedical field. He got distinctions for both his mini research projects that he had to do in his first year, and among other things, he now has a green belt in jujitsu and is treasurer of his club. Tami lives in Solihull and completed her training as a domestic in Birmingham with the charity Jericho, and has passed her maths and English exams. I see her just about every week. She is currently looking for a job, and also hopes to start college next September. We will once again spend Christmas together this year, Matt arriving back from Bristol tomorrow. Olwen is likely to return to South Africa during the next year once the financial settlement is confirmed.
I have had a busy year, especially as I had to take over the administration of our MA in Evangelical and Charismatic Studies programme, and this included the introduction of a Distance Learning version, which began at the end of September with five students: two in Canada, one in the USA, one in Kuwait, and one in Namibia. A lot of work went into getting this ready over the summer.

But it was also a time for book publications, as my new book To the Ends of the Earth: Pentecostalism and the Transformation of World Christianity (Oxford, 2013) came out in January (you can google it) and the second edition of Introduction to Pentecostalism (Cambridge, 2014) came out in November, my best-known book and ten years after the first edition. I am still editor of the interdisciplinary journal PentecoStudies. No new book on the horizon yet as I have been too busy with other things. It is likely that I will not be able to retire at 65 and don’t have to either. I have taken on new PhD students this year, and have 14 altogether at the moment. If they all finish before I retire there will be over 40 PhD graduates under my supervision from all over the world, one of the achievements I am most pleased about. I have had two trips to the USA this year, in May at Yale and afterwards had another few lovely sun-filled days with my sister Carol and her husband Randy in their idyllic seaside house in St James, Pine Island, Florida. In October I had a conference on Chinese Pentecostalism at Purdue University, West Lafayetteville, Indiana. A lecture trip to Heidelberg, Germany in July and to Geneva, Switzerland a month ago.

The big event was the surgery on my ankle at the beginning of September. I had an ankle fusion done arthroscopically, with two titanium screws holding the ankle together. I have just been to see the orthopaedic consultant (specialist surgeon) today, and he is pleased with the mending process but wants me to have a CT scan to see what is causing pain at the back of the ankle (and possibly further surgery). But I am now allowed to walk without the air boot I have worn for almost two months (plaster cast before that). I am not walking without pain, but it seems to be better than it was before the operation, so that is good! 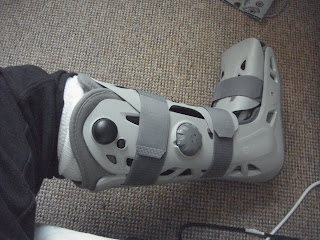 We said goodbye to Nelson Mandela last week, and within a week of that I also attended funerals of a former Nigerian PhD student, and a friend from the church we were part of for many years who was also a good friend to my Mom and Dad in their last years. And our dear Uncle Ralph, Dad’s elder brother, finally left us earlier in the year at the age of 96.

We wish you a blessed, peaceful Christmas and a happy new year. With love from us all,
Allan, Matt & Tami
Posted by Unknown at 10:55 No comments: